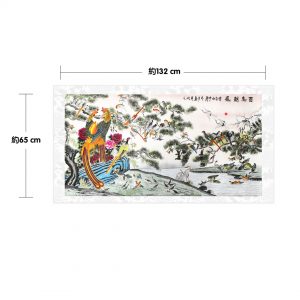 In ancient China, the phoenix was used as a metaphor for the emperor, which later evolved into the dragon representing the emperor and the phoenix representing the empress. However, either the former or the latter phoenix symbolises the imperial family. It can also be used to express people’s hopes for a peaceful and prosperous world. The atmosphere is warm and the rituals are varied, and the painting is a reflection of the Chinese people’s traditional desire for peace and blessing. The ‘Hundred Birds Facing the Phoenix’ is an extremely popular folklore legend. The legend says that the phoenix was originally a simple bird that worked tirelessly throughout the years to save various birds from starvation in a year of great drought with the fruits of its hard work. In gratitude for its saving grace, the birds chose the most beautiful feather from each of them and offered it to the Phoenix, who has since become a divine bird of beauty, nobility and holiness, and is revered as the king of all birds. On its birthday, it is worshipped and congratulated by all the birds, and in some places it is often used in wedding ceremonies. It represents good luck and happiness.

Warm note: the work is framed but without a wooden frame, packed in a long brocade box 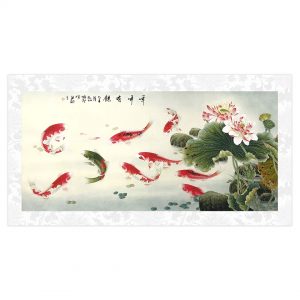